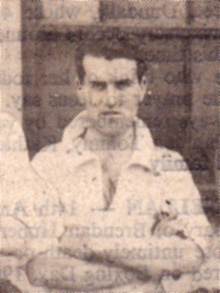 Tom’s first team outings in the 1940-41 season were at left half back, standing in for the injured Dicky Lunn. By 1944-45 he was mainly at inside left and his last season saw him varying between the no 6 and no 10 positions.

He spent a couple of seasons with Bohemians, collecting an FAI Cup runner up medal in 1947 when the amateurs went down to Cork United in a replay. In the drawn game Tom’s 70th minute penalty earned Bohs a replay.

His father, Peadar Halpin, was a member of the club’s management committee from the late 1920s to the mid-1960s and served two terms as Chairman. His grandson Peter served for a period as the Club’s General Manager in the period 2005-2006.