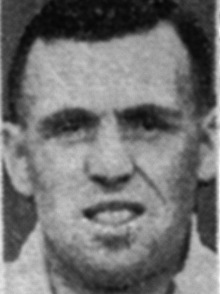 Frank Grice was 16 years of age when he joined the King’s Own Scottish Borderers and was a member of the powerful Regimental team that won the Army Cup and supplied six members to the British Army team.

After completing his Army service, he joined Linfield late in the 1929-30 season and in one of the Blues all-time great teams won League Championship and Irish Cup medals in his first season, playing inside-left to goal-machine Joe Bambrick. He added another IFA Cup medal to his collection in 1931.

His English Football League career started with Second Division Notts County in the 1931-32 season. Although signed as a scoring inside left, after a 20 goal haul with Linfield, he found his true role in the half-back line, where his accurate ground passing initiated many fruitful attacks. Alternating between left-half and centre-half, in five seasons with County he played in 102 League games (4 goals).

In March 1936 Tottenham Hotspur were urgently seeking a strong defensive wing-half to strengthen a defence that conceded goals far too easily and Frank went straight into the White Hart Lane first team. For a season-and-a-half he performed the task admirably, but his role was taken over by the rapidly maturing Vic Buckingham.

Retained until the Second World War, Frank melted back into the reserves and finished with a Spurs Cup and League record of 55 Appearances (1 goal).

In November 1939 he joined Glentoran in the Irish League (and played inside-left for the Irish League against the League of Ireland at Dalymount in March 1940) and his 68 appearances and 36 goals over the following two seasons included a spectacular overhead goal in the final of the County Antrim Shield against Distillery.

When Sam Prole went North on a shopping spree in the summer of 1941 he came home with the signatures of Frank and Johnny Lavery from Glentoran, and from Belfast Celtic Johnny Leathem and Artie Kelly. Dicky Lunn had the left-half spot nailed down on the Dundalk team and Johnny Lavery was quickly pencilled in at inside left with Frank playing inside-right between Paddy Barlow and Artie Kelly.

There was a goal rush in the opening games (32 in the first 10) and Frank helped himself to five at the feast. At Cup time an injury to Dicky Lunn caused a reshuffle and Frank finally settled into the left-half spot where he became a key member of one of Dundalk’s most effective half-back lines—Donnelly, Leathem and Grice.

A glorious year was capped by winning the title of All-Ireland champions after annexing the FAI Cup, the club’s first, and becoming winners of the inaugural Inter City Cup. Grice made up for lack of pace by his excellent positional play, accurate passing, strength in the air, and strong kicking.

He alternated between the left-half back and inside left positions and when at half back his instincts were to attack. He was very dangerous from close-in frees, scoring regularly and creating others.

For two more years Dundalk supporters rejoiced in that memorable half-back line, before Frank retired from the playing side and after a short spell with Distillery he returned to Glentoran as club secretary.

In May 1948 he was appointed club manager and he remained in that capacity until December 1954. His seven seasons in charge were among the most successful in the Glen’s history when he landed a total of 11 trophies, including a League-Cup Double in 1950-51.

During this period he nursed the emerging talents of Ireland’s greatest wing-half, Danny Blanchflower, transferring him to Barnsley in April 1949. In 1954 he moved to England as manager of Southern League club Chelmsford City, a post he held for four years.

Dundalk Democrat: “An attacking wing-half who made up for his lack of pace by great positional play. An accurate passer of the ball, he was strong in the air and his bullet-like kick was especially useful for close frees, leading to a regular supply of goals, both directly and indirectly. A great club man.”