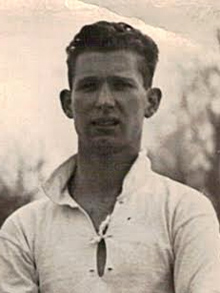 Matt’s early football experience was with Gaelic football while he was attending O’Connell’s School. He moved to soccer in the Dublin Schoolboy’s League with the famous Shelbourne Nursery St Finnbarr’s that produced such stars as Rory Dwyer (Shelbourne), Brendan McNally (Luton Town), Dermot Curtis (Bristol and Ipswich).

He collected a number of medals with Finnbarr’s before signing for Shelbourne where he spent three seasons (1952-53 to 1954-55) playing mainly at right halfback. In that period he played under managers David Jack and Frank Broome and made a total of 30 first team appearances (12 League; 1 FAI Cup; 17 Shield).

After three seasons with the Reds he headed for Oriel Park in the autumn of 1955. Under player-coach Walter Rickett, he spent most of his single Dundalk season of 1955-56 in the left-half back position, but was frequently called on to fill a variety of other roles—right-half, right-full back.

In a typically poor mid-50s year, Matt was at right-full when the club suffered a shock first round FAI Cup defeat against Leinster League team Workman’s Club that resulted in the departure of Rickett from Oriel Park.

After the season 1956-57 with Bray Wanderers, he spent the following couple of years with Longford Town in the Leinster League, where he was joined for the 1957-58 season by Kevin Blount and former Dundalk players Sean McCarthy and Jackie Lyons.

A memorable year that saw the Metropolitan Cup reside in Longford but a promising League-winning position went to waste thanks to the ineptitude of the League officials in dealing with a match programme that was still being played in Late July and into August!

Matt stayed on after the departure of Blount and McCarthy, being appointed captain for the year.