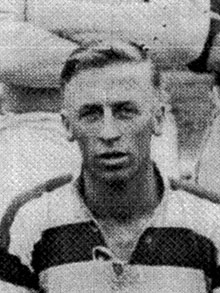 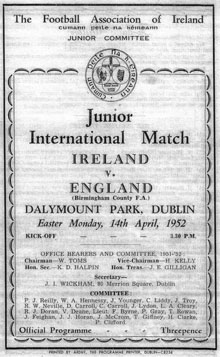 Billy Flanagan’s first involvement with the Dundalk club was with the Minor team in the 1941-42 year, playing in the FAI Minor Cup. His local junior clubs included Dealgan Rovers and St Josephs. With Dundalk Reserves his opportunity for a first team run out came at the beginning of the 1945-46 season, lining out at right-half back before Joey Donnelly had completed his signing arrangements.

Over the next couple of seasons Billy played with the reserves as well as competing in the Dundalk and District Leagues with St Josephs. After the ‘Joes’ win in the Byrne and Maguire Cup in 1949, Billy and team mate Joe Martin went to Derby County for a two-month trial, but Dundalk made claims on both players and their trial period was cut short.

During the successful 1949 FAI Cup year, Billy was a prominent member of a talent-stuffed Dundalk reserve team and was called upon for first team duty at right full back for the last four League games. The clear out following the Cup success paved the way for an extended run for Billy in the 1949-50 season, but a serious knee injury knocked him out for the following year.

When fit again he joined Bank Rovers in time for the Bank’s victory in the Leinster Junior Cup, where Bill’s performances earned him a Junior International Cap in April 1952. In a 1-1 result against Birmingham County FA at Dalymount Park Billy was partnered by George Hale (Waterford), Larry Conneely (then Galway and later Ballybarrack) and Alan Guildea future Dundalk centre-forward.

For the following 5 seasons Billy was with Newry Town, becoming team captain, and he won the hearts of Newry fans for his many fine performances, mainly in his favourite full-back role but also when required at half back and inside forward.

The highlight of his Newry career was in 1954-55 when as captain he led them undefeated to the Alliance League championship. He was 37 years of age when he collected his last football memento, helping Glyde Rovers to success in the 1961 Dundalk Summer League.

He started work at fourteen years of age with the GNR Works until it closed in the 1950s, when he moved to Duffy Builders. Afterwards he switched to ESB where he stayed until his retirement. When his playing days were over he took to refereeing and coaching, but it was his role as a Community worker in the newly established Fatima area for which he will be long remembered.

He played a central role in the establishment of a Credit Union, a Primary School, a hurling club and was one of the prime movers in the inauguration of the unique Poc Fada Na hEireann, which is still competed for annually over the Cooley Mountains.