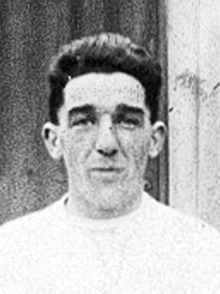 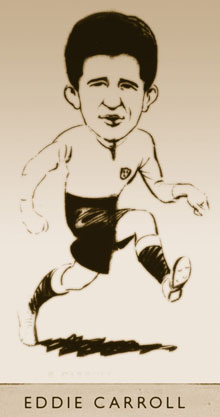 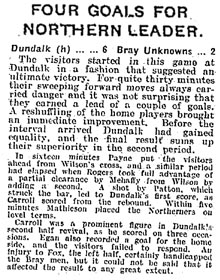 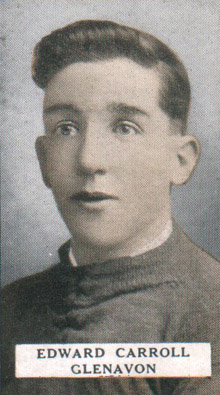 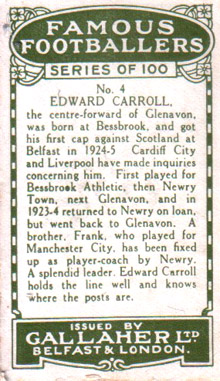 The 1956 Dundalk Supporters were in no doubt as to the club’s best centre forward in its first 30 years membership of the League of Ireland. In three spells, and over six seasons, Eddie Carroll had been credited with 113 goals and left a set of scoring records not likely to be matched.

Over 17 seasons with seven clubs—Glenavon, Aberdeen, Dundee United, Dundalk, Newry Town, Dolphin and Drumcondra—Eddie is reckoned to have scored in excess of 200 goals. Only Joey Donnelly scored more goals for Dundalk. Nor was he a prima donna: with Dundalk he filled every team position and he frequently turned out with the reserves for a Sunday game having lined out the previous day with the first team.

From Bessbrook, Eddie was one of a large family, all footballers (“if somebody lent them a goalkeeper and a linesman they could make a team of their own” Dundalk Democrat) and his junior football days were spent with Bessbrook Athletics, before joining Newry Town.

His first senior club was Glenavon during the 1921-22 year and he was loaned out to Newry in 1923-24 when they became members of the Irish League. In 1924-25 he returned to Glenavon where he continued to attract admirers and where his ‘speed, dash and resource’ guaranteed a continuous supply of goals.

It came as no surprise when he received an International cap against Scotland in February 1925, losing 3-0 at Belfast. For the 1925/26 season he joined Aberdeen, but found it difficult to command a first team place, with his total season appearances limited to five.

In his final game he scored in a 1-1 draw with Raith Rovers. Late in that season he became a prodigious scorer with Aberdeen Reserves when in one incredible 4-match stretch he scored no less than 18 goals.

At the beginning of the 1926/27 season, Eddie was back in the Aberdeen Reserves and after 6 goals in 3 games, Dundee Utd bought him for £500 and put him straight into the first team, when he scored on his debut in a 2-1 loss to Kilmarnock. Though Dundee were relegated that season, Eddie was the club’s leading goal scorer with 11 League goals in 21 appearances. In the Scottish Cup he scored twice in 4 appearances.

The highlights for Eddie with Dundee United were a hat-trick (against Hearts) and his key role in two stunning appearances against the Old Firm. The first match was against Rangers on Christmas Day 1926 when the home side had a shock 2-0 win - Eddie helped make the first and scored the second. In his last League appearance in Scotland he scored twice in a 3-3 draw against Celtic.

He played a number of games at Dundee with his brother Frank, who had been with Belfast Celtic and Manchester City and had been player manager with Newry Town. The description of Eddie during his Tannadice stay was “A tireless centre forward whose enthusiasm was infectious”.

On his Dundalk debut in the opening day of the 1927-28 season, he scored Dundalk’s first League hat trick in a 5-2 win in Athlone, and went on to clock up 16 League goals. He netted twice in the 4-1 FAI Cup replay win over Rovers and also scored 4 goals in the Leinster Senior Cup tie against Athlone, another club first for four goals in a game. In 9 Shield matches he knocked in 16 goals to leave him with a season total of 38, finishing with a last match hat trick against Shelbourne.

A solo goal straight from a kick-off in the last minute of the last League game in the following season against Fordsons brought his League tally to 17, enough to leave him as the leading League of Ireland goal scorer for the 1928-29 season. Following a dispute he left the club and went to Newry Town for a year and in the 1930-31 year he was the leading League scorer with Dolphin in their debut League of Ireland season.

He returned to Dundalk in 1932-33 for the club’s first League championship win, lining out on the right wing, “sending across peaches“ for centre forward John Smith. In the following season he spent the first half of the year at wing half and only lined out at centre forward on a handful of games—yet he was the club’s leading scorer and on November 19th 1933 his four goals against Dolphin set a new mark for the best individual score in a League match.

In November 1934, after playing in Dundalk’s first four League games, Eddie was on the move again, back to Dolphin, where he chipped in 7 League goals as Dolphin won the League Championship. He raised his League contribution to 16 goals in the following year and added a League runner up medal to his collection when Dolphin were second to Bohemian.

During the 1936-37 year he was player-coach at Dolphin in their last League season. The 1937-38 season saw him return again to Dundalk for his third spell but before the League had commenced he had joined Drumcondra.

When his League career was finished he trained the Dublin members of Dundalk’s squad and on match days he “rubbed down” the players. He continued to play and manage into the 1940s in his native Bessbrook and was in charge as player-coach of Bessbrook Strollers in their 1945 Irish Junior Cup and Mid Ulster League double. His senior status ruled him out of the Cup but he made an impact in the League win, once hitting a brilliant hat trick against Glenavon reserves

He was twice honoured with selection on the League of Ireland team, scoring on both occasions.

He later became a regular visitor to Dundalk Greyhound track where he ran some good dogs and had particular success in sprint events, winning the feature Sprint Cups at Dundalk and Navan.

While with Glenavon … Irelands Saturday Night review: “Has proved to be one of the most capable exponents wearing the royal blue of the Lurgan team. A fast and tricky front-line man. Is blessed with speed, dash and resource … a tricky man on the run.”