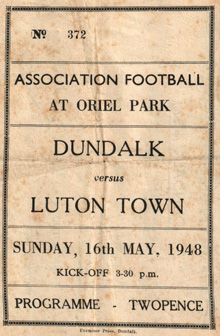 Signed by Dundalk from St Patrick’s Athletic in the Leinster League, Dessie Byrne had also seen service with Munster Victoria and the Army’s 44th LDF. He scored on his Dundalk club debut in a League game at Oriel Park against Shamrock Rovers and stayed at inside-left for the remainder of the season.

For the following year, after the departure of Jimmy Dykes, he became an ever-present at centre-half in a team that failed by a single point to lift both the City Cup and the League Championship and became the first Dundalk team to remain undefeated at home throughout the League.

He made two appearances in the prestigious FAI XI versus the Irish Army series, lining out at centre-half on both occasions, in 1947 and again in 1948. A very popular and wholehearted player, there was much regret when he was released following the signing of the Scottish team for the 1948-49 year.

He spent the 1948-49 season with Botanic in the Leinster League before returning to St Patrick’s Athletic, whose domination of the Leinster Senior League in the late 1940s led to their election to membership of the League of Ireland in 1951. League Championship winners in their debut year and three League Pennants in their first five Senior seasons proved they were also capable of mastering the big boys.

While sharing in these League triumphs, Dessie failed to bring home an FAI Cup winner’s medal and had the unfortunate experience of scoring an own goal with ten minutes remaining in the 1954 final, when Drumcondra prevailed by that single score. Rubbing salt into the wound was the manner of the score—Dessie headed the ball over the head of the advancing goalkeeper, his brother-in-law Jimmy Collins!

According to The Gillette Book of the FAI Cup by Sean Ryan and Terry O’Rourke, Pats’ players were on big money for that final—the club had placed a substantial bet at generous odds before the first round and a big payout promise was used as an incentive for the players. £500 per player was on offer, sufficient in 1954 to buy a decent house.

Twenty years later, his son Sean would also win a runner-up memento with St Pats after losing to Finn Harps in the 1974 Cup final. But following his move to Dundalk he would more than compensate, adding two winner’s medals, in 1979 and 1981, to the family collection of FAI Cup silverware.

“I’ve seen no better centre-half in a while … sound without been spectacular … very effective … has fine head-work –last Sunday he got almost every ball in the air.” Dundalk Democrat