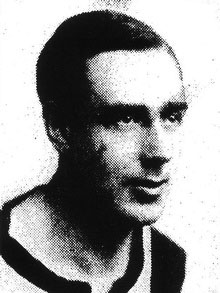 Belfast-born Willie Brown was only 5 years of age when his parents moved to Dundee in Scotland. With Dundee North End he developed a reputation as a very dependable defender and moved to the Welsh League, first with Porth and later with Llanelly.

In 1922-23 he joined Third Division North Rochdale and quickly established for himself a permanent spot on the first team. At that time Rochdale were rarely out of contention for Divisional honours and in his five club seasons the team were runner up on two occasions and once filled the third spot.

As a result of Willie’s performances he was regularly touted for International honours with Ireland but there was a richness of quality defenders at the time. After five Rochdale seasons he moved for one year to Third Division South Torquay United and then headed for Dundalk. In his six English League seasons he had made 194 League appearances.

He lined out at left full back for Dundalk’s opening League games in the 1929-30 year, partnering Jimmy Kelly. But three games into the season, after the team conceded eight goals, Willie was getting unflattering match reports from Dundalk Democrat ‘…very slow…tackled badly…was not a good full.’

It was no surprise that he was dropped for the next game when Jimmy Kelly moved to left full and Johnny McKeown took over at number 2. No more was heard of Willie Brown.