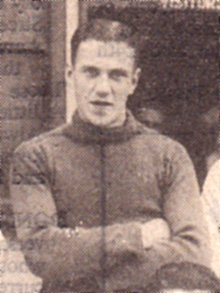 For the 1944-45 season ex-Drumcondra Paddy Barnes filled the goalkeeping gap left by the departure of Gerry Matier. Constant team changes and a porous defence did not help the new keeper. While home form was reasonable (just one pre-Christmas loss), new and unwanted records were set away from home—the opening 10 fixtures on the road were all lost and 41 goals conceded in the process.

The series concluded with the club’s biggest League loss when, at the Markets Field in Limerick on December 17th, Paddy picked the ball out of his own net on nine occasions. In the New Year he was replaced. In the following season he was called upon for two appearances following an injury to Freddie Kiernan. Paddy was renowned for the length of his kickouts, well into the opponents half of the pitch.