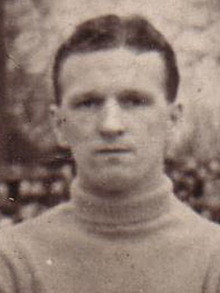 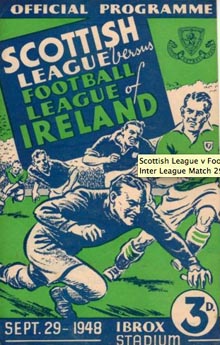 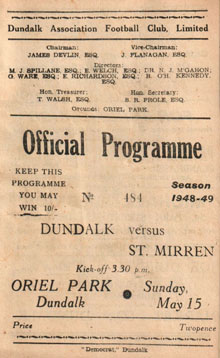 Signed by Hearts in 1941, and only 5ft 9in., goalkeeper Alex Anderson played regular League football before being posted to Ceylon on Army duty with the Royal Marines. During the war he guested with Chelsea and Tottenham Hotspur.

Unable to regain his place afterwards with Hearts, he had short spells with Stirling Albion and Third Lanark, before signing in February 1948 for Rochdale where he played in 4 League games by season end.

Dundalk’s failure to agree terms with Freddie Kiernan led to a call from new Scottish coach Ned Weir and in August 1948 Alex headed for Dundalk—he was the last of the ‘Scottish’ team to report for duty to Oriel Park.

In a memorable year, Alex was the only ever-present during a season that delivered the FAI Cup and Dublin City Cup, runner up in the Inter City Cup and pipped on goal average from runner up spot in the League Championship.

A brilliant season start earned Alex his selection to the League of Ireland team, along with four club mates, to play the Scottish League at Ibrox Park at the end of September, before an attendance of 57,600.

By this stage the Dublin City Cup was at Oriel Park, the first Trophy win in six years, thanks to an undefeated 9-match run, with a goal record of 27 for and 7 against.

Anderson’s confident goalkeeping continued to underpin the Dundalk defence through a successful FAI Cup campaign and finally to runner up spot in the Inter-City Cup.

The break-up of the successful squad at the end of the season, because of financial difficulties, left Alex clubless but a 2 month’s trial with Southport in November 1949 led to a contract and before the season had closed he had made his Southport League debut and where, in two seasons, he made 21 League appearances.

In the days when only green was fashionable for goalkeepers he became notable for wearing a yellow jersey—the one he had worn for the League of Ireland team.

He married a Bolton girl and settled in Southport working as a painter and decorator. After a long illness, he died at his home in Ainsdale when only 62.

Active … eager … shows intelligence in positioning and in advancing … and most importantly, in my view, he is daring … and his penchant for coming out of goal to narrow the marksman’s view of it stood him well. Everything he does is capable and workmanlike and he inspires confidence in his defenders. Dundalk Democrat