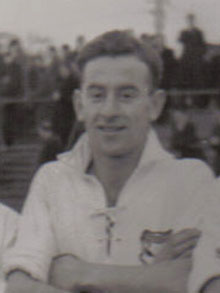 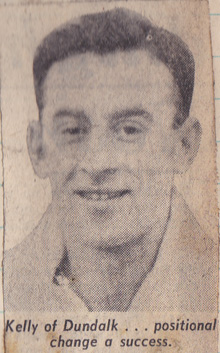 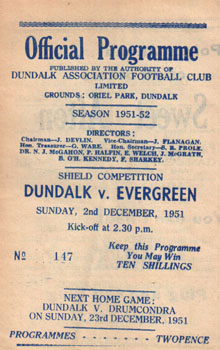 21 year-old Droghedaman Paddy Kelly was signed by Dundalk on the strength of his performances in the previous year’s Leinster Junior Cup, when Bray Wanderers got the better of Drogheda in the final. His Dundalk debut was a winning one in the opening day Presidents Cup final against Drumcondra on August 15th 1951.

Lining out at centre-half he was on every team sheet until he was sidelined in November by an injury in a League visit to Cork. He made one failed comeback attempt in February but then had to sit out the rest of the season, missing out on the FAI Cup triumph.

After a knee operation, it was late October in the following season before he returned to duty, but after 13 successive appearances injury struck again and by the middle of January another season had ended for Paddy.

Courageously he made several comeback attempts, and while his last Dundalk season was more productive he still lost two months through injury.

A player of considerable talent, whether as a half-back or at centre-forward, many believed that he would move to higher things, but he was only 24 years old when his injury-stricken Dundalk career came to an end.

Thanks to the contacts of his older brother Jimmy, he secured a Bedford Town (Southern League) contract for the 1954-55 year, and made 21 appearances, split between fullback and the forward line.

For the following year Paddy was with a Bedfordshire League Works team, GF United, and in 1956-57 he moved on to St Neots Town (Cambridgeshire) playing in the United Counties League.

Paddy was a younger brother of Jimmy and Michael Kelly, who both played with the club in 1945-46. Michael, a right-winger, played just 2 games with Dundalk while left winger Jimmy made 15 appearances, scoring 6 goals. They played together against Bohemians at Dalymount Park in a 0-0 City Cup match in September 1945.

After his Dundalk spell Jimmy had moved to Glenavon, from where in July 1949 he had been transferred to Second Division Tottenham Hotspur. While Spurs were promoted to Division One in that season Jimmy was transferred to Carlisle United the following February, without making a first team appearance at White Hart Lane.

Over three seasons, playing at outside left, he made 42 Third Division North appearances with Carlisle, scoring 6 goals. Afterwards he spent a couple of seasons with Bangor City in the Cheshire County League.

Jimmy’s last playing season was with Bedford Town in the Southern League in 1954-55, when a broken leg brought closure to his playing career.