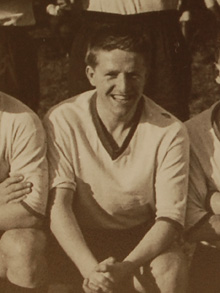 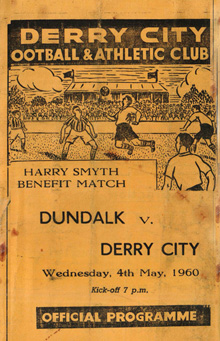 Only 5ft 3in, Eddie was a firm favourite at Oriel Park, where his ball juggling acts earned him the name of ‘Fiddler’ and where he was equally at home at either right wing or inside right. He started as a schoolboy with Rathfarnham and then with O’Connell Boys St John Bosco club, whose curriculum included Gaelic, Hurling, Boxing, Billiards, Snooker and Swimming.

After a spell as a junior with St Laurence in the Dublin Leagues, he was invited to join Shelbourne, where he spent one season, scoring three League goals. In his short spell with the Reds he was in competition for the right wing spot with Shel’s Legend Joey Wilson.

Working as a postman at Whitehall Post Office, a work colleague, Shay Noonan, invited him to join Dundalk. Coming to Oriel Park in the Summer of 1959 at the age of 20, he made his debut on the right wing in the opening fixture against Sligo Rovers in the City Cup.

The late September arrival of Liam Munroe and Kit Lawlor transformed the season, driving Dundalk to the top of the League table in the New Year, finishing only 3 points behind the winners and securing the best finish in many years.

Moved to inside-right during the Shield campaign, Eddie was helping Mousy Munroe to a club record 19-goal League haul.

The arrival of Jimmy Hasty, Willie Coleman and Jimmy McDonnell during the following season saw Eddie, after six early season starts, play most of the year with the reserves.

Under manager Johnny Robinson he was on the Workman’s Club squad that won the Leinster Senior League in 1961-62 and this led to further League of Ireland action with Sligo Rovers and Transport.

Eddie was invited by his brother-in-law to play with the works team of Goulding Fertilisers in the AUL League and from that received full-time employment with the company.

He continued to play in over-40s football until a heart attack in 1984 put a halt to his playing activities but not his football interest.

A bubbly character and remembered by his teammates as a very fine singer, Eddie was the team entertainer, whose first query when the team checked into a hotel was ‘Where’s the piano’.