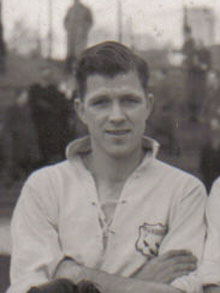 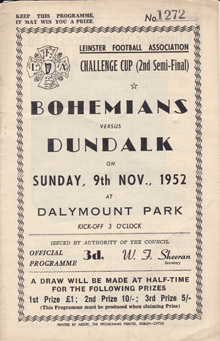 The 1950s decade was undoubtedly the low ebb of the club’s fortunes, the seasons being indistinguishable in their mediocrity and awfulness. The only exceptions came in the two FAI Cup wins of 1952 and 1958.

It was the misfortune of Bobby Kane that his Dundalk career was sandwiched by these two wins. In the five seasons between his club debut (Presidents Cup, 13th August 1952, against St Patrick's Athletic) and the last match of the 1956-57 season, barring the odd injury his name was on practically every team sheet. In all but a handful of games he wore the number 4 shirt.

Previously with Longford Town, where he was a member of the victorious 1951 Metropolitan Cup team, and with Shamrock Rovers for the 1951-52 season, he was a dependable defensive wing-half, who rarely ventured forward and managed just 3 goals in his 173 appearances.

Early in the 1957-58 season, when Leo McDonagh was moved from the right wing to right-half back, Bobby was tried at inside right for a few games but that did not work out and by early October his Dundalk career had finished, missing out on the post-Christmas era, the winning FAI Cup venture. Shortly after leaving Dundalk he moved to England to work.

Dundalk Democrat in its 1956-57 pre-season review described him as “one of the most reliable club players in recent years ….. utterly dependable …. never shirks a tackle …will run until he drops.”