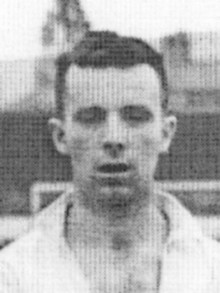 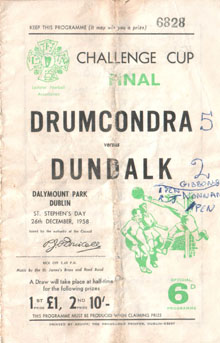 Left winger Eugene Hoey was transferred from Bohemians to Shamrock Rovers for the 1956-57 season, when Rovers had practically a clean sweep of all the trophies, losing out only to Drumcondra in the FAI Cup final. But with Liam Tuohy at the top of his form, Eugene’s opportunities were limited and he was with Dundalk for the following year.

A very quick player and a good crosser of the ball, he was in permanent possession of the left wing spot until suffering severe rib injuries in the second round FAI Cup tie against Limerick. Returning to the field after his first injury he got a second knock, but bravely continued until the end. He paid the price for his courage by missing the rest of the season and Tommy Kerr took his place in the victorious cup winning team.

He returned to the no. 11 spot in his second season but had to be content with runner-up medals in the President’s Cup and the Leinster Senior Cup, in each case losing out to Drumcondra in high-scoring games: 3-4 in the opening day Presidents Cup and a St Stephens’s Day 2-5 loss in the Leinster Cup.

Tall, fast and clever, he had been a prolific scorer at schoolboy, youth and junior level. He scored the winning goal in Home Farm’s 1952 FAI Minor Cup final win over Tower Rovers from Cork and in the same season had been on the mark for the Irish Youths XI against Liverpool County FA. After his underage career, he spent a couple of seasons with Grangegorman in the Leinster Senior League before transferring to Bohemians, making his senior debut during the 1954-55 year.