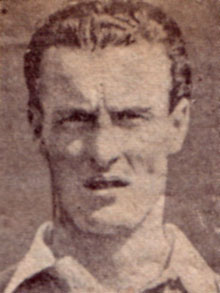 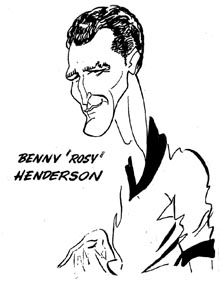 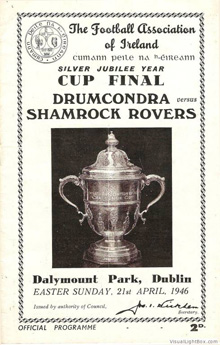 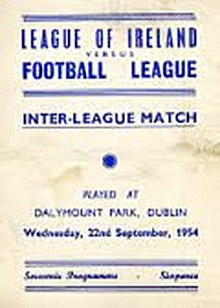 For ten years from the mid-forties, League of Ireland grounds thrilled to the sight of the tussles between Drumcondra winger ‘Rosie’ Henderson and the local fullbacks.

Six feet tall, equally adept on either wing and possessed of one of the hardest shots of his era, Rosie usually had the last laugh—in his ten seasons with Drumcondra they finished in the top two League spots six times and competed in four FAI Cup finals. Benny kicked in more than fifty League and Cup goals and picked up two Championship and two FAI Cup medals.

A big clear out at Drumcondra saw four of their stalwarts join Dundalk for the 1956-57 season—Benny, Shay Noonan, Johnny Robinson and Paddy Neville—but even that illustrious quartet failed to provide the necessary spark.

A dreadful season—mid season wage cuts, first round Cup exit, tenth in the League from 12 teams, a single win in the last 15 games—terminated with an attempted coup by a group of dissatisfied supporters at the Annual Meeting. Even that failed. ‘Rosie’ deserved a better exit.

Before coming to Drumcondra for the 1945-46 season he had spent periods with St Paul’s, Bohemians, Transport and Ierne. His nickname came when he rendered the popular tune ‘Rosie O’Grady’ at the 1946 Cup final celebrations, after he scored the winner with five minutes remaining against Shamrock Rovers, in his first season in senior football.

During the 1951-52 season he played a quick visit to the Irish League, playing 4 times for Distillery, and scoring once, before returning to Drumcondra.

He was voted ‘Man of the Match’ after scoring twice and making two more in the League of Ireland’s 5-2 defeat of the Irish Army team in May 1948, earning selection on the International squad for a two-match tour to Spain and Portugal.

He was capped for both games, playing on the right wing against Portugal at Lisbon, defeated 1-0, and a week later he switched to the left wing in a 2-1 loss to Spain at Barcelona.

Employed with Alex Findlater and Co., in the 1960s he coached Dalkey United.