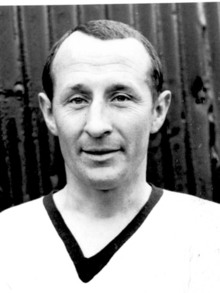 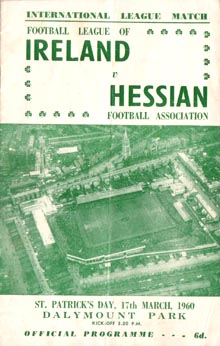 A native of Newry, Ted Harte (5ft 6 in., 11 stone) played with his local team before transferring to Glenavon. A versatile player, who could play in defence or attack, he was cool and constructive and from his favourite left-half position loved to come forward, regularly turning defence into attack with his perceptive passing.

His outstanding performances in his first Dundalk season secured 2 Inter League honours with the League of Ireland at the end of that year, with victories against the Hession and Irish League teams.

He and Tommy Rowe at right half were the mid-field driving forces behind the 1962-63 League Championship victory, forming the engine that dominated the midfield area against all opposition and combining with Cross, Hasty and Callan in one of the club’s finest football combinations.

An early season injury in 63-64 knocked him out of the club’s first European Cup venture against Zurich but he returned to lead the charge for a second Championship title, failing to a powerful Shamrock Rovers squad. At the end of that season, and in his last game for the club, he added a Top Four Cup medal to his Dundalk collection when Limerick were overcome in a replay.

Always suberbly fit, his honest all-out play, and his ability to fit in anywhere he was required, made him one of the club’s most popular and respected players.

He was later player-coach at Bangor, where he had former Dundalk colleagues Victor Meldrum and the McConville brothers, Brian and Tommy, under his care.