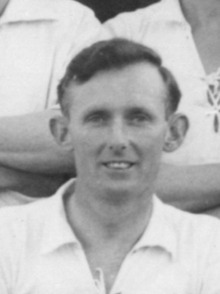 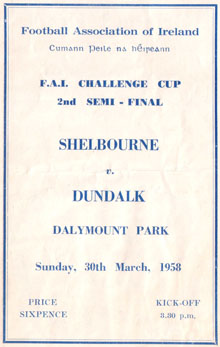 Vincent Gilmore, ex-Cliftonville, playing at left-half back, was one of six new players who made their debut in the opening fixture of the 1956-57 season, against Sligo Rovers at Oriel Park in the City Cup. After a 1-1 scoreline the home side advanced on a better corner count and three days later advanced further in the City Cup after defeating Transport. The following weekend there was another victory after Cork Athletic were despatched in the opening Shield fixture.

This three-wins-in-a-row sequence turned out to be the season highlight—and it was only August 26th. A dreadful season, which included a first round Cup exit, the last away win was in November and only one match from the last thirteen yielded a win.

Although he didn’t sign on for the following season until October, for Vincent this was a more rewarding and more varied experience. After shuffling between left half and inside left, for the second round Cup tie against Limerick in March he was at centre-forward—the ninth player to wear the number 9 shirt.

He was still there on April 20th, collecting an FAI Cup winner’s medal after defeating Shamrock Rovers in one of the biggest upsets in years. Although the main architects of the Cup success was Hugh Gannon’s four campaign goals and a defence that didn’t concede a goal in five Cup games, Gilmore’s contribution was vital. He scored the only goal in the semi-final victory over Shelbourne, he played a central role in making Gannon’s winner in the final and his ability in the air constantly created opportunities for his teammates.

A pharmacist in his native Warrenpoint, he returned to the Irish League for the following season. He became a regular visitor to Dundalk in the mid sixties playing with Newry Ramblers, in the company of Ted Harte, in local 5-a side competitions during Dundalk Festival. While with Cliftonville, he was honoured in September 1955 with a Northern Ireland Amateur cap against England.