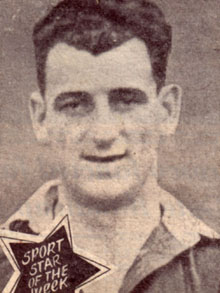 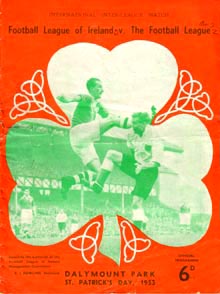 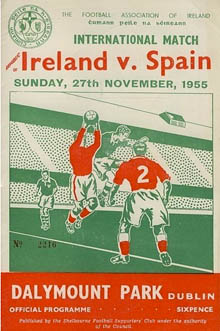 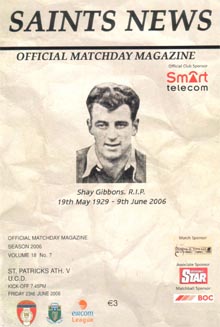 With newcomers to the League of Ireland, St Patrick’s Athletic, centre forward Shay Gibbons was the scoring sensation of the League in the 1950s. Championship winners in their debut season of 1951-52, Pats won three League pennants in their first five years.

Gibbons was their destroyer-in-chief and in those 5 seasons he only once failed to score more than 20 League goals (the League campaign then consisted of 22 games) and was three times the League’s leading goalscorer. Already a Youth and Junior International, his prolific record earned Senior International (4) and Inter-League honours (9).

After short spells with Holyhead and Cork Hibernians, he came to Dundalk for the 1958-59 season, scoring twice on his debut against Cork Hibs in an Oriel Park Shield fixture. And to prove he had lost none of his skills, he knocked in seven in his first five outings. There were no trophies in a very poor season, but Shay enlivened the year with his 23 goals.

His 11 League goals in this, his last League of Ireland season, brought his League career total to 120. While at Oriel Park he recounted the story of St Patrick’s Athletic 10-3 victory over Dundalk in January 1955—Shay was fined 2 weeks wages by Pats manager, Alec Stevenson, for not scoring enough goals!

Dublin-born of a Wicklow mother and Kildare father, he was from a football family—his father and brothers had played at Inter-County Gaelic—and his early clubs included Home Farm, Whitehall Rangers and Bohemians. As a teenager he had a trial with Hull City.