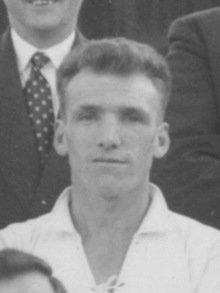 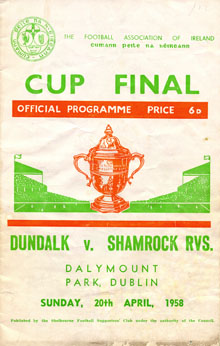 “He brought strength, weight, determination and dash into a line that badly needed these qualities and he has been our most likely goalscorer with those thrusting bursts of his”. This was theDundalk Democrat’s assessment of Hughie Gannon when considering the club’s FAI Cup prospects in the spring of 1958.

Inside forward Hughie had already won an FAI Cup medal with Shamrock Rovers in 1955. And in the case of this first medal he did not know he was playing until late morning of the Cup final. He had joined Rovers from minor nursery club Johnville only a month before the Final, played in just three League games and was the last minute replacement for injured player-coach Paddy Coad. Failing to break into the all-conquering Rovers team he moved in 1956-57 to Shelbourne, scoring 8 goals from 25 outings. [League 12 (5gls); Shield 9(2); Others 4(1)]

After a couple of weeks in the winter of 1957 with Workman’s Club in the Leinster Senior League, he came to Oriel Park in January 1958, scoring on his club debut in a 3-1 League loss to Waterford on January 5th, and completing the forward line-up that swept to FAI Cup victory in April.

An inside forward who believed in moving forward at every opportunity and with the skill to find scoring positions, Hughie supplied four of the six Cup Campaign goals—but none were as important as his 62nd minute Golden Goal in the 1-0 Final victory against red-hot favourites Shamrock Rovers. A clearance by Johnny Robinson, a cross from Tommy Kerr, a flick goalwards by Vincent Gilmore and Hughie “rose like a pheasant” among the back-pedalling defenders to snatch the winner.

For his troubles Hughie ended up with a broken cheekbone and after a rub of the magic sponge from Barney Sheridan he spent the rest of the game dazed on the wing. By the time he got out of hospital, a week later, the celebrations were over!

During his second club season the goal-scoring duties were taken over by Shay Gibbons with inside forwards Hughie and George Toner orchestrating the supply lines for Shay. There were two runner-up mementoes for Hughie in his second season, on each occasion to Drumcondra: opening the season with a 4-3 loss in the Presidents Cup and a St Stephen’s Day Leinster Cup loss in another high-scoring 5-2 score line.

At the end of his second Oriel Park season a call from his former Shamrock Rovers colleague, Jackie Mooney, brought him to Bangor City in the Cheshire League for the 1959-60 season. A Welsh Cup semi-final appearance, losing to Cardiff City in a replay, and two victories in the preliminary round of the FA Cup was the limit of the club’s achievements.

While it meant travelling to Wales each weekend by ferry, the financial rewards made it worthwhile for the unemployed Hughie. Although only 23 years old, this was his last football season. He had started to work with the Dublin Gas Company and later switched to Irish Glass Bottle where he stayed until his retirement.