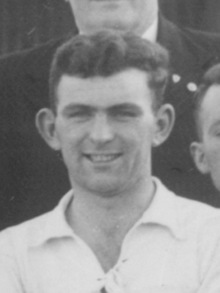 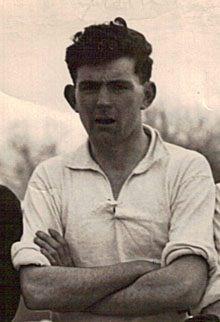 Ken Finn was only a toddler when he came to Dundalk with his parents from the USA, the land of his birth. A big strapping youngster, he was just 10 years old when he lined out in the local Under-14s League, and collected League and Cup Trophies with local Schoolboy teams St Josephs and Arsenal. He made his Dundalk debut, aged 17, in an early September 1954 Shield trip to Limerick.

But after a dreadful season start—a single win from the first 14 games—changes were demanded and Ken soon found himself as an ever-present at full-back beside Joe Ralph.

At the end of the season he captained the Irish Youths, in a team that also included his teammate John Geoghegan and townsman Willie Coleman (Drumcondra), in home and away fixtures against Liverpool Youths. For the remainder of his Dundalk career he became an automatic selection—although not always at fullback.

During the 1956-57 season he was assigned the centre-forward role and knocked in 6 League goals. The highlight of his Dundalk career came in 1957-58 when the unfancied local team won the FAI Cup, defeating the red-hot favourites Shamrock Rovers in the final.

The Cup victory was thanks to a magnificent defence that did not concede a goal during the 5-match campaign and the Ralph-Finn-Ted McNeill trio joined the Dundalk Hall of Fame of famous back lines with an FAI Cup win on their escutcheon.

After the cup final a transfer to Wolverhampton Wanderers failed when the clubs didn’t agree terms and on the following October 26th, in a Shield game against Limerick, Ken was appointed captain for the day on the occasion of his last club game, before returning to the USA.

Over the next 20 years he added to his sports laurels at two games—both GAA and Association Football. For 16 years he played in the New York Soccer League and in 1960 he was capped with the American team in the World Cup Qualifiers against Mexico for the Chile World Cup and again the following year in a friendly against Colombia played in Bogota.

In this game his Gaelic background proved useful when he replaced the injured US keeper at half-time, keeping a clean sheet in the second period.

He was also a member of the 1960 German-American League All-Stars squad that participated in a 5-match tour against German League clubs. A natural centre-half back at Gaelic football, he was also comfortable anywhere in the full-back line.

He was an ever-present on the New York GAA team from 1959 to 1975, twice winning National League titles, in 1964 against Dublin and again in 1967 when Irish champions County Galway were overcome in a two-leg final.

His brothers Dermot and Rory were also members of the 1967 winning panel. His club honours in the States included a Senior B New York Championship medal with the Louth team. When his playing days were over he took to refereeing and coaching. A mechanic with TWA until reitirement, Ken has been a frequent visitor to Dundalk over the years, the most recent being for the 2014 League Championship decider at Oriel Park against Cork.

Joe Sherwood in the Evening Press described the Ralph-Finn performance in the 1958 FAI Cup final as from ‘two confident and happy Musketeers, a couple of fearless young men, who went full belt into their job with the same alacrity as a thief raiding his neighbour’s woodpile’.