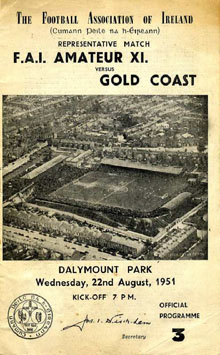 1953-54 was a dreadful season—last in the League and 8 wins from 38 outings—and weekly team changes were the norm. Even when there were no personnel changes you could be sure the selectors would conjure up a positional switch or two. Mick Finglas, who had spent the previous three seasons with Bohemians, was one of those who could never be certain, from week to week, what jersey he would find himself wearing.

Starting the season at left halfback, he spent a while at left fullback when Joe Ralph was sent upfront. Harry McQuillan was then assigned to the full back line and Mick spent the tail end of the season on the left wing, vacant after the departure of Fergus Moloney. Pa McCabe replaced him for the last few games.

He had the distinction of scoring in a schoolboys International at Dalymount Park on May 30 1947, when the English Schoolboys were outplayed by 8-3. Then with Stella Maris and playing at inside-left, his right-inside partner was Billy Quinn, who scored from a penalty and who also had a spell at Oriel Park.

He also had an amateur cap, lining out on the right wing before a Dalymount Park attendance of 17,500 in Aug 1951when Ireland were fully stretched to defeat the bare-footed Gold Coast team by 4 goals to 3, thanks to an outstanding display by Waterford’s Dinny Fitzgerald, capped by a hat-trick.

The closest Mick came to a senior honour was in December 1952, when it took a replay before Bohemians lost out to Shamrock Rovers in the final of the Leinster Senior Cup. He later (1957-58) had a short spell with Shelbourne.