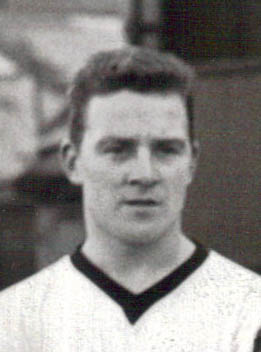 Pat was the first of three brothers to play with Dundalk. Their father Hugh who had been capped for Northern Ireland 5 times in the 1920s, had made over 100 English League appearances playing with Blackburn, Bournemouth, Reading and Portsmouth. Transferred from Glentoran to Blackburn in 1922 he had returned in 1928 to Belfast Celtic in the Irish League. He owned a popular licensed premises at Omeath, just yards from the border with Northern Ireland.

Pat played junior football with Bessbrook before moving to Portadown in the Irish League. In his first Dundalk season of 1959-60 he played in a variety of positions—centre-half, wing-half, fullback, centre-forward and left wing. A hard tackler, his favourite position was at right-full and his opportunity for a permanent posting came in 1960-61. Introduced for the third game of the season he became an ever-present for the rest of the year.

In the following year, after the departure of Johnny Robinson, the no. 2 jersey was handed to John Murphy and Pat took over the centre-half duties where his performances attracted the attention of Coleraine. Financial constraints dictated that the offer of £750 could not be refused—before the end of December Pat was at the Coleraine Showgrounds.

He had a very successful career in the Irish League under Bertie Peacock.

Coleraine FC website described him as “one of their most influential ever players” and continued:

“Pat Davey was one of Bertie Peacock’s star men in the 1960s. and was a cornerstone of Peacock’s legendary Bannsiders team which was so successful during that period.

Northern Ireland legend Peacock turned to goalkeeper Victor Hunter and commanding centre-back Pat as he set about building a formidable team in the north-west that would eventually win the Irish League title in 1974.

Unfortunately, Pat’s career had already been cut short by injury and the man affectionately known as ‘big Paddy’ was forced to retire aged 29.

The Davey football family boast a prestigious record with Pat lining out for the Bannsiders after spells at Portadown and Dundalk.

His brother Con also played for Coleraine, Glenavon, Dundalk and Cliftonville, while brother Terry competed for Portadown and Dundalk.

The boys were born in Killyleagh but moved to Omeath in 1953 where they ran their father’s well known pub and shop."