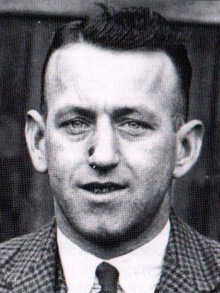 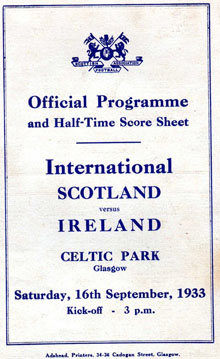 Hugh Blair was one of Joe McCleery’s large Class of 1926-27, one of many 'double-jobbers' who paid fleeting visits to the Athletic Grounds in the club’s first Free State League season. Affiliated with Irish League club Queens Island in their last League season before winding up, he wasn’t yet 18 years of age when he made his Dundalk debut in December 1926 in a high profile game against League Championship holders Shelbourne that drew a record crowd to the P J Carrolls’ Recreation Ground, estimated in some press reports as ‘between 5,000 and 7,000’.

He made a second visit on February 6th for the Athletic Grounds Shield clash against Athlone Town, scoring in a 3-2 home victory. A month later he was at centre forward with the Irish League team that played the League of Ireland at Windsor Park.

The previous year while with Ballyclare Comrades he had received a Junior cap and also represented the Intermediate League against the Leinster League. At the end of the 1926-27 year, after collecting a League Runner Up medal with Queen’s Island, he moved to Portadown, where over the next four seasons he picked up further representative honours, all on the right wing. These included 3 International Caps, in 1928 against France and 2 against Scotland, 1931 and 1932.

A move to Manchester City proved unsuccessful but that opened the way to a 3-season stay with Swansea, where he made 68 appearances scoring 12 goals, and made another International appearance against Scotland in 1934. After one final English League season with Millwall in 1935-36, he retired from football and later became a teacher in Liverpool.