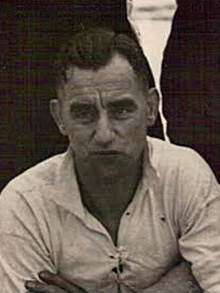 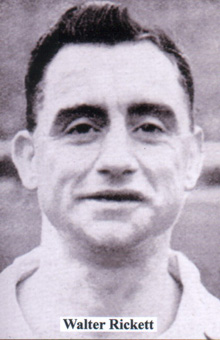 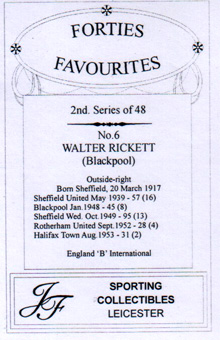 Although he signed for Sheffield United in 1939, he was almost 30 years of age when he first tasted English League football in the first post-war season of 1946-47.

With Blackpool he had been on the losing FA Cup final team that included Stanley Matthews and Stan Mortenson, when they lost 4-2 in the 1948 final to Manchester United.

A clever left-winger with a great ability to deliver accurate crosses, he was one of a handful of players to play with both Sheffield clubs and was known as the Tom Thumb of Sheffield football.

He was a member of the 1949-50 Wednesday squad that were promoted to the First Division, were relegated at the end of the following season and then bounced back immediately, winning the Second Division Championship in 1951-52.

He spent his last English League season with Halifax and played a key role in their giant-killing turnover of Newcastle United—winners in each of the two previous seasons—scoring in a 3-1 win.

Walter had one English B International appearance—against Switzerland at Hillsborough. Before coming to Oriel Park he had spent a season as player-coach with Ballymena United.

Expectations were raised with his opening 5-match sequence without a loss, the best starting run in five years—but this was followed immediately by a 5-match winless run. The gloom was lifted on Oriel Park that winter on one occasion when Walter and Leo McDonagh each contributed hat tricks in a 6-1 defeat of Evergreen United. There was another false dawn in the New Year when there five straight League wins and 15 goals.

Alas, on the following weekend the season came to a crashing halt with a first round FAI Cup loss to unfancied non-League Workman’s Club. Inside another few weeks Walter departed to take up a similar post with an English non-League club—the team he left failed to win a single game after the Cup debacle.

After a period with Snowdon Colliery Welfare in the Kent League he was appointed manager of Sittingbourne for the 1957-58 season, delivering the Kent League and Cup Double. He player-coached Ramsgate Athletic in the Southern League from March 1959, winning the Kent Senior Shield in 1960-61. After his release from Doncaster Rovers, Francie Callan spent a couple of seasons at Ramsgate under Walter.

He left Ramsgate during the 1962-63 season to manage another Southern League club Gravesend and Northfleet, (now known as Ebbsfleet United,) where his three year stint has been described as “arguably the club’s darkest days” when a combination of poor football and empty coffers left the club desperately close to extinction.

Despite playing in the lowest ever level in the First Division of the Southern League the club struggled for three seasons to get out of the bottom two positions. When yet another season of struggle was apparent in 1966/67 Walter was replaced after a few months.

Notwithstanding the performance of the first team during his single year at Oriel Park, he is fondly remembered for the interest he took in local youths, encouraging them to come to Oriel Park, where he organised and supervised individual coaching sessions.