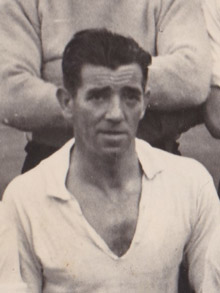 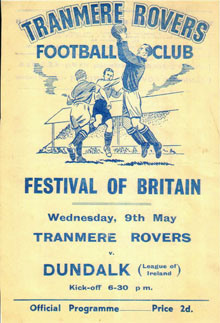 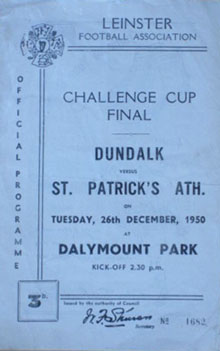 Player-Coach in 1950-51, Pat Gallacher was the first coach to land the Leinster Senior Cup.

A Scottish Schoolboy International, capped against Ireland in 1927, from his school team St Agnes his junior clubs included Townhead Benburb and Dunoon Athletic. Pat’s first move South of the Border in 1933 was not a success when he failed to make the first team with Millwall. He returned to Scotland, helping Third Lanark to win the Scottish Second Division in 1934-35 and to a losing Scottish Cup final in 1936, when they went down 1-0 to Rangers.

Stocky built, and a tricky artistic inside forward in the typically Scottish mould, he was transferred to Second Division Blackburn Rovers in October 1936 for a fee of £1,250. In two seasons at Ewood Park he made just 11 League appearances—it was stated that despite his undoubted skill his major weakness was a tendency to be over individualistic.

In June 1938 he joined Bournemouth in Division 3 (South) and continued with them during the war-time leagues. After they had failed narrowly to gain promotion at the end of the 1947-48 season and at 35 years of age, he moved to Weymouth as player-manager. Including war-time games, his Bournemouth League and Cup record was 98 appearances, 21 goals.

In his first Weymouth season they were promoted from the Western League to the Southern League and reached the 2nd round of the FA Cup, losing to Yeovil. He went one round better in his second season, losing in the 3rd round to Manchester United. His 2-season playing record at Weymouth was, Apps 79, Gls 27.

Nothing in his previous record suggested that Pat was particularly noted for his goalscoring—but his 21 goals for Dundalk was the club’s season best, and in the last Shield game on December 3rd at Oriel Park he hit 4 in a 5-4 victory against Cork Athletic.

The highlight of the playing season was the St Stephen’s Day Leinster Senior Cup win over St Patrick’s Athletic, after 25 years of trying and 5 losing Final-day appearances. Pat was the creator of Dundalk’s goals in the 2-1 win—the first by Paddy Gilbert and the winner in the last minute finished by Leo McDonagh.

It was a vintage year for the blooding of new talent with first starts for future stars Walter Durkan, Leo McDonagh, Tommy Traynor and Peter McParland, and players like Joe Martin and Tommy McCabe became first team regulars. He was a popular coach, who had the name of introducing variety into the training sessions and making them more enjoyable than the traditional ‘couple of laps’ routine.

Pat’s last duty with the club was to lead the team on its first overseas venture in May 1951 during its 5-match programme participating in the Festival of Britain. Subsequently settling in Bexhill-on-sea, he was an HGV driver until retiring in December 1977 and he remained in Sussex until his death in 1983.

He was an uncle of Pat and Billy McPhail, who played in the 1940s and 1950s with Glasgow Celtic.