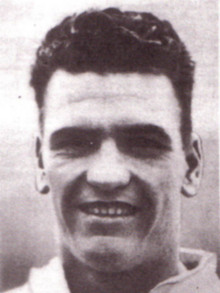 11-times English International Jack Barker was the second cross-channel club coach in the 1947-48 season. In November 1947 he replaced Harry Sellars, staying until the end of the season, when the club failed by just a point to bring home its second League pennant.

Appointed club coach in late November 1947, replacing Harry Sellars, he stayed until the end of the season. A one-club man, Jack had spent 11 pre-war seasons with Derby County, becoming one of the club’s ‘greats’ with a career League and Cup record of 353 appearances. In this period Derby were twice runners up in the First Division and were rarely out of the top six.

He won 11 English Caps, captaining his country in his last International in 1936 against Wales. There might have been many more had the selectors not thought him too rough, but he was a hard-bitten miner who had survived a pit disaster caused by a roof collapse. A centre-half who loved to move forward, he was noted for his trademark long passes turning defence into attack.

His second England cap came in the famous 1934 Battle of Highbury in a hotly-contested and violent match against World champions Italy. Within two minutes the Italian centre half retired with a broken foot. After some vicious fouling had resulted in England captain Eddie Hapgood breaking his nose and centre-forward Ted Drake departing with blood poring from a leg wound, Jack and Arsenal’s Wilf Copping took matters into their own hands as England emerged 3-2 winners. Stanley Matthews would later recount that it was the most violent match of his long career.

When his playing days were over Jack joined the Army Physical Training Corps and in the first post-war season of 1946-47 he was appointed manager of Bradford City, resigning in January 1947.

He arrived in Dundalk immediately before the opening League game but just four points from the opening six games did not make for an auspicious start. However an undefeated run to the end of the League failed by only a point to catch the front-runners Drumcondra. He is specially remembered for the introduction of innovative coaching methods to Oriel Park, including ‘heading tennis’ designed to improve ball control.

After leaving Dundalk he returned to Derby, working for Rolls-Royce. He had a spell in 1948 as trainer-coach at Oldham Athletic, finally returning in 1953 to Derby County, for a two-season stint as Manager. After the club was relegated in 1954-55 to Division Three (North) for the first time in its history, Jack resigned, becoming a fitter’s mate at the Carriage and Wagon Railway Works in Derby.

From ‘Derby County Whos Who (Gerald Martin)’ …. “a survivor from a past age when with Derby County. The change in the off-side rule lead to the development of the stopper centre-half but Barker always wanted to attack. He was one of the Derby greats.”