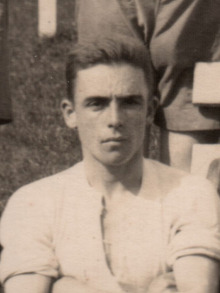 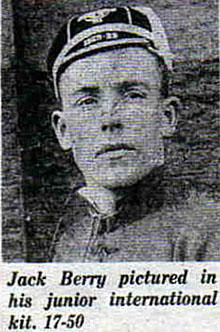 In his native Portadown, left-winger Jackie Berry had played with Edenderry Arrows and with Mid-Ulster club St Anthony’s.

Before coming to Dundalk he had been with Inniskilling Fusiliers and with Belfast Intermediate League side Brantwood. In 1929, when he was with Brantwood, he had received his junior cap playing against Scotland at Tynecastle, Edinburgh.

He joined the army and during a period of leave turned out with Portadown in the Irish League, before being bought out of the armed forces by Dundalk . He was the third number eleven to field with Dundalk in the 1929-30 season when he made his debut against St James’s Gate in a mid-November League game at the Athletic Grounds, scoring in a 3-2 win.

Jack immediately struck up a good relationship with his inside partner, Welsh International George Beadles, becoming a regular first-teamer and was rewarded with his place on the League of Ireland team that travelled to Swansea in May 1930, to take a 6-1 drubbing from the Welsh League.

For the following season he was moved to the right wing, with Joey Donnelly on the left flank. Switched to inside right for the FAI Cup to make room for the in-form Jerry McCourt, a niggling injury cost him a place in the drawn final with Shamrock Rovers, the club’s first Cup final appearance, and he aggravated the injury in a Shield game before the replay, being nominated 12th man.

He finished out the season with Ballymena. For the following year he was with Coleraine and later played with Portadown, Newry Town and Bray Unknowns. When he was with Portadown he was a member of their 1931-32 Mid Ulster Cup-winning team, the club’s first ever trophy success since joining the senior ranks in 1924.

Jack’s second period in the League of Ireland came in January 1936 when he joined bottom of the table Bray Unknowns and for the rest of the season was consistently credited as the leading Bray performer, but he could do little on his own with undoubtedly the worst team in the league, finishing a long way last with just two points. Their only victory came in a 3-2 win over Dundalk, when Jack was directly responsible for all three Bray goals.

At the outbreak of the war he joined the army and he survived serious injuries from enemy machine gun fire, being evacuated from Dunkirk in July 1940. A postman, he was 82 when he died in 1989. His older brother Gordie was a well known professional boxer.