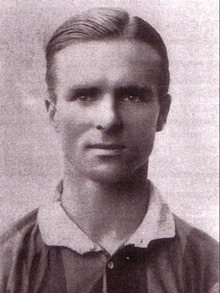 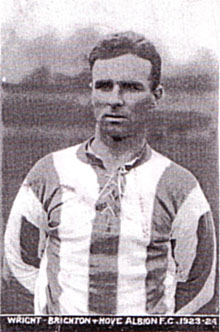 Born in Leicester, Steve Wright moved to Dublin on business and spent a period with Bohemians in 1914. After Army service in the First World War he joined Bolton Wanderers, where for 3 seasons he acted as cover for English International Jimmy Sneddon.

He had accumulated 10 English League games, mainly at centre-half, when Norwich City signed him for a fee of £750 in July 1922 and for the following season was a first team regular, finishing with 36 League and 4 FA Cup appearances.

During the summer of 1923 he was an unsuccessful candidate for the position of player-manager at Kent League Chatham Town. His last playing club was Brighton and Hove Albion during the early part of the 1923-24 season, when he was struck down with injuries and at the end of that season he announced his retirement at the age of 31.

Before coming to Dundalk in the summer of 1930 he was reported as having being involved in the training of Bolton Wanderers and with some of the Birmingham teams.

In his first season in charge at Dundalk the club attained its highest League placing to date, taking the runner up medals behind Shelbourne, and reaching its first FAI Cup final, losing in controversial circumstances to Shamrock Rovers following a replay.

But the first club trophy win wasn’t far away: a stunning 7-3 win over Shamrock Rovers in the final of the previous year’s Presidents Cup, played in the opening weeks of the 1931-32 season.

Steve’s familiarity with the English scene was fully utilised in the signing of a number of former English League players—Jack Hampton, Andy McCluggage, Albert Harrison, Jimmy Bullock and Joe Cassidy.

However it was a much less expensive team that he managed in his third year, 1932-33, to take the League Pennant, when he led Dundalk to became the first Provincial team to win the League Championship.

When he departed at the end of the 1933-34 season after 4 years with the club he had steered the team to two wins and four runners up awards and in each of his four seasons had as a minimum attained a runner up position in at least one competition. He had later spells as trainer at Lincoln City (1934 to 1938) and Ipswich Town (from July 1938).