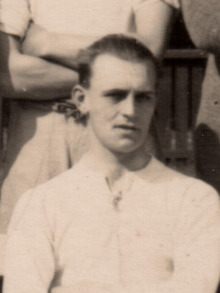 All but three of the 1930-31 16-player squad that secured runner up positions in both the League and the Free State Cup had been recruited from Northern Ireland.

But by the middle of January, and on heavy grounds, his goals dried up and Billy ‘Ledger’ Firth took over the number 9 spot. After another barren spell at centre forward in March, in the absence of Firth, Herb left before the season ended.

A product of the Northern Amateur League, playing with Ophir and later Park End, Herbert had shown early evidence of his goal scoring instinct when he was the recipient of a medal presented to the leading Amateur League marksman.

He joined Bangor in January 1928, making his first team debut at the end of the month, while still in his teens. In the remainder of the season, a little over three months, he scored 23 times. In that period he was as prolific as the two leading goalscorers—Joe Bambrick (Linfield) and Sammy Curran (Celtic)—who were capturing all the headlines as they duelled for the season’s marksman’s honour.

“He is not of the burly dashing type and is not built to sledgehammer his way through defences. Rather does he depend on anticipation and ball control to outwit the opposition. He has been a big asset to Bangor and in the Seasiders camp none is more highly esteemed.” Ireland’s Saturday Night reporting on his signing as a professional for Bangor [May 1928].