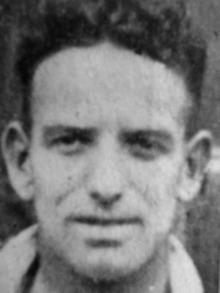 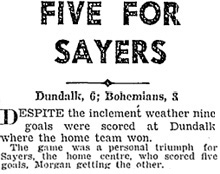 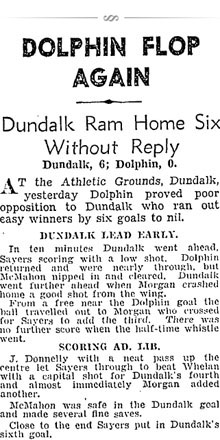 Joe Sayers started his goalscoring career with Broadway United in the 1924-25 season, switching for a while to Ards United and Millwall before he emigrated to Canada. He returned home and lined out with the newly promoted Bangor, where his knack of finding the net even with unsuccessful teams was brought to a wider audience and he transferred in 1928-29 to Queen’s Island.

Although Joe continued to score, bottom of the table Queen’s were relegated. Linfield were on the look out for a standby centre forward to provide cover for serial goalscorer Joe Bambrick and in June 1929 Sayers moved to Windsor Park.

Signed by Dundalk from Cheshire County League side Ashton National for the 1935-36 season, Joe Sayers set a number of scoring records which are unlikely to be overtaken—Most Goals in a Season (43), Most Shield Goals in a season (19), Most Shield Match Goals (5) and Three or More in a match (8 times).

Joe displayed no special characteristics that made him stand out, and it was acknowledged that he could not handle a frosty ground. But he had all of the requirements of the great goalscorers—always in the right place, two-footed, a great header of the ball, powerful, accurate shooter and a hunger for goals.

Most importantly he was flanked by four excellent ‘football players’ who fed his hunger—Hugh Morgan on the right wing with Joey Donnelly at inside-right and on his left flank was Dan Kelly for the first 8 games, who was replaced by Gerry McCourt, and left winger Jim Mailey. Their short passing game opened up the defences and Joe did the finishing.

The other four were not goal-shy and the five of them hit 80 goals between them. In the club’s last Athletic Grounds season, the year’s haul of 106 goals set a new club record.