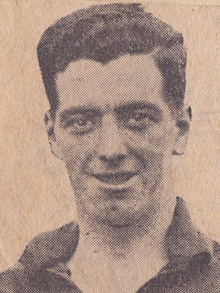 Alf Rigby made his International debut against Hungary in December 1934—Joey Donnelly and Willie Fallon also made their Irish starts on the same day.

A move to Dundalk for the 1937-38 season brought no change of luck. In an injury-plagued season (he appeared in less than half of the games) he was rested in advance of Dundalk’s third FAI Cup final appearance but collected his third runner-up medal, again on a 2-1 score—this time against his old club, St James’s Gate.

In the semi-final against Shamrock Rovers he had scored the winner in a 3-2 victory with just three minutes left, heading in Mick Hoy’s free kick. He also scored in the Cup final while his early season goals were crucial in annexing the Dublin City Cup for the first time in the club’s history.

His last League season in 1938-39 he spent with Shamrock Rovers, scoring a number of times during the Shield campaign but his career came to an end in early December, following the return of Joe Ward, Rover’s leading scorer in the previous season. In 6 League of Ireland seasons, with three clubs (Bray Unknowns, St James’s Gate and Dundalk), Alf scored a total of 68 League goals and another 11 in the FAI Cup.

Alf and his elder brother had a hair-raising experience in Poland at the outbreak of the Second World War. Completing a contract at the dockyards of Gdynsk, they were the only Irish citizens caught in the war zone and it took a hazardous three week journey through neutral territories before the brothers returned safely to Dublin.

Alf afterwards emigrated to Canada. On a trip home to Ireland in the summer of 1981 he paid a visit to Dundalk to renew acquaintances with his old teammates, including Joey Donnelly. A couple of months after his return to Canada he died from a heart attack.