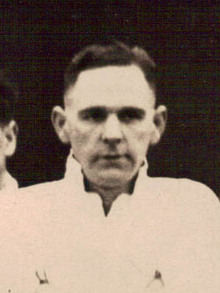 Left-back Len Richards was a Welsh Schoolboy International and spent some time as a teenager with Tottenham Hotspur. He transferred to Cardiff City as an amateur, making one League appearance in the 1932-33 season before heading for Dundalk.

The departure of Gordon McDiarmuid from the previous year’s Championship winning squad had not adequately been filled until Len arrived in November 1933.

With Paddy Clarke as his full back partner, he became an ever-present. The Irish Times match report for the Free State Cup semi-final against Cork noted; ”I would include Clarke and Richards among the best club pair I’ve seen in Irish football for years.”

A season of classic performances ensured that his services were much sought after at the end of the year. However, although he played a number of season end games with Belfast Celtic, he re-signed with Dundalk for another year.

After Paddy Clarke was transferred to Leicester, Len had fellow-Welshman Billy Powell as his new fullback partner for his second season, as Dundalk made it through to the finals of two of the Cup competitions. The Leinster Senior Cup was lost to St James’s Gate but the holy grail of the Free State Cup was the much more important prize.

Unfortunately, Len ended up with a second runner-up medal after Bohemians had prevailed by 4-3 in the Final. He was honoured with selection to the League of Ireland team, which played the Welsh League in March 1935 at Dalymount Park.

In the summer of 1935 he signed for Dundee, making his debut in the Scottish First Division before the end of August 1935, and over the following fifteen months was a first team regular. He was out of favour for a while but returned to first team duty in November 1937, becoming an ever present to the end of the 1937-38 year, completing 80 appearances in his three Scottish League seasons.

The local media were in no doubt as to his virtues: “Resolute… crisp-kicking back … unhesitating tackler … kicks a good length ball.”

After Dundee were relegated for the first time in their 45 year history, Len followed his former Dundee manager, Northern Ireland International Billy McCandless, back to the English League with Newport County.

He had his moment of glory with Newport, winners of Division Three South Championship in the 1938-39 season. In his two Newport seasons he made 62 appearances, while also working at Newport Docks.

During the war years he lined out with Lovell’s Athletic, a Newport works team from confectionary manufacturers G F Lovell & Co, competing in the Western Region Football League, with English League teams Bristol City, Cardiff and Swansea Town. After the War he worked with Alcan.

“Perhaps the most polished full in the Free State. Rarely balloons a ball or drives it to touch. Is regarded as the best placer of a return we ever had in this position. Cool always and when it comes to in-football can give points to the cleverest forward” was the Dundalk Democrat’s pre-Cup final player review.”