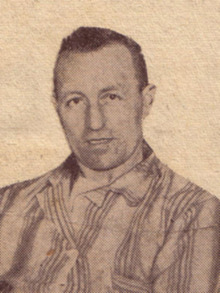 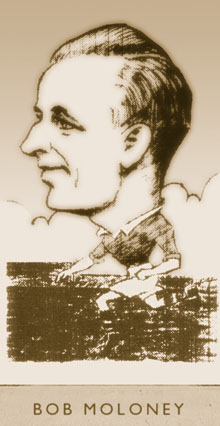 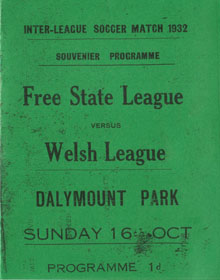 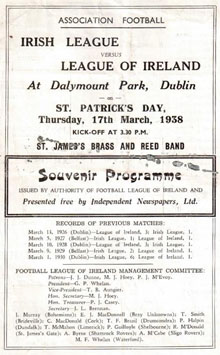 Bob Maloney spent the 1925-26 season with Walsall (3 League appearances) and after a few months at Peterborough, in November 1926 he was transferred to Northampton Town. For the next 6 seasons he was the Town’s centre-half, making 194 League and Cup appearances.

Playing in the Division 3 South, the ‘Cobblers’ achieved their highest League placings in this period—in four of Bob’s seasons they finished in the top six, only failing by two points in 1927-28 to become League Champions. For his services he was granted a benefit match in 1932 at the end of his last season.

He and two of his Northampton teammates, Ben Wonnacott and John Weston, joined Shelbourne for the 1932-33 year. Bob and Wonnacott were honoured by the League of Ireland selector’s for the October 1932 Inter-League game against the Welsh League at Dalymount Park.

After two seasons with Shelbourne (47 Appearances) he headed for France and in the three years before coming to Dundalk had been captain of Racing Club de Paris, where he had received further representative honours.

He was appointed Dundalk club captain and the season was less than a month old when Bob was accepting the club’s first trophy since lifting the League Pennant in 1933 and the first to be brought to Oriel Park. The 2-1 win over Cork in the Dublin City Cup final also ended a long sequence of losses in competition Cup finals.

It was a successful year, with the introduction of Dicky Lunn, Mick Hoy and Jimmy McArdle that finished with third spot in the League, just two points behind the Champions, and qualification for the club’s third FAI Cup final. But sadly for captain Bob Maloney there would be no Cup final appearance.

His outstanding club performances had secured his selection for the League of Ireland team to play the Irish League on March 17th 1938 less than a month before the Cup final, along with club mates Billy O’Neill, Mick Hoy and Joey Donnelly. In this match he suffered a serious knee injury, which ended his career.

He was a huge loss to the club—as sheet anchor of the defence, as captain and as an inspirational figure of great influence—and was badly missed in the FAI Cup final loss to St James’s Gate.

Permanently incapacitated as a result of his injury, he was granted a benefit match in September 1939 with a game at Dalymount Park between selections from the League of Ireland (Dublin) and the Irish League (Belfast) that had gate receipts of over £200.