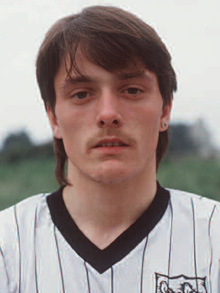 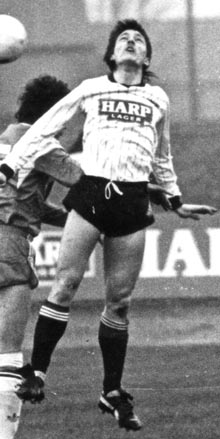 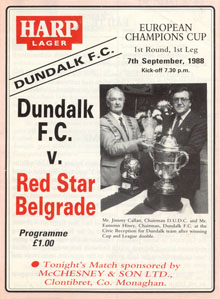 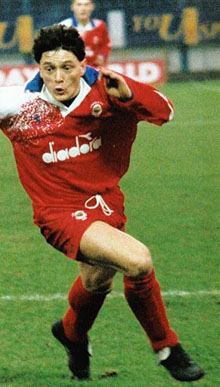 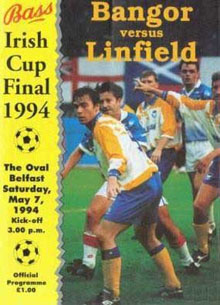 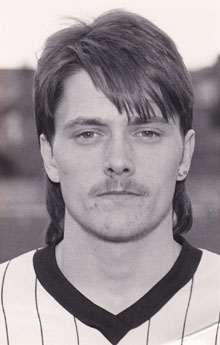 The most inspired and certainly the most controversial signing of the nineties, the arrival of striker supreme Dessie Gorman at Windsor Park, Belfast in the winter of 1992 was to prove a watershed moment which in its cross-border symbolism, transcended the game itself.

Nearly 20 years after he became the first high profile Catholic in decades to sign for Linfield—a club renowned as a bastion of Protestantism in Northern Ireland, Gorman reflected “I was at Linfield for four years and I would say they were the best four years of my career”.

Without seeing him play and on the recommendation of Jim McLaughlin, he was signed from Shelbourne by the Blues boss Trevor Anderson. Gorman’s arrival also proved the catalyst for what was to become Anderson’s crowning achievement: the clean sweep Blues team, featuring the likes of Gary Haylock, Soupy Campbell and Pat Fenlon.

For Gorman, the furore surrounding his signing was much ado about nothing, and he was happy to let his feet do the talking as he set about becoming the darling of Windsor Park.

An instant hero on the terraces for his tendency for conjuring the sublime and a footballing maverick who on his day was a cut above anything else in the Irish League, Linfield supporters nicknamed him the ‘Dundalk Hawk’.

His re-uniting with ex-Shelbourne partner Haylock created a deadly duo—if one didn’t score them the other did and frequently they both contributed to the scoreboard. In the 1993-94 term they hit 35 Premier goals between them out of a club total of 63. That same season delivered the four major Irish League trophies to Windsor Park—Premier Division, Irish Cup, League Cup and Floodlit Cup.

During his four seasons at Linfield, he scored 55 goals in all competitions and when he left there were no medals left to be won.

28-years of age when he moved to the Irish League, Dessie already had a medal and goal filled cv.

He was a member of the highly successful Tommy Connolly-managed Dundalk Youth squad of the early 1980s. When retaining the Dublin Schoolboy League’s Younger Cup in 1982, Dessie was the final day’s Man of the Match. Weeks later he starred in the Multi-National Boulogne Youth Tournament with a runner up spot for Dundalk Youths.

In the 1983-84 year he was with Bank Rovers under John Murphy, winning the Polikoff Cup and qualifying to play in the Leinster Senior Cup, where they drew Dundalk, only going down by 2-0.

Tommy Connolly signed him for Dundalk and he made his debut in the opening match of the 1984-85 season, in a Leinster Cup match against Dunleary Celtic. Before the season closed he had scored his first League goal.

Under Turlough O’Connor he headed the club’s League scorers list for three years on the trot and in his last year at Oriel Park, 1988-89, his 8 League goals left him one adrift of Paul Newe. Along the way he had expanded his medal collection, including the League-Cup Double in 1987-88 and for his role in the crucial run-in to the double victory he was awarded the Soccer Writers Player of the Month Award for April 1988.

No one who was present will forget his contribution to the mother of all comebacks on Easter Monday 1988 in the third last League game of the season against Derry City at Oriel Park, when Dundalk clawed their way back from a two-goal deficit with just 10 minutes left on the clock—his 90th minute winner sealed the victory and cleared the way for the League Championship victory.

Two weeks later at Oriel Park, in the last day title-decider against St Patrick’s Athletic—a point adrift of Dundalk at the top of the League table—he was the first to reach John Cleary’s cross just before half-time, tying the match and doing enough to earn the club’s eighth Championship title.

During the 1986-87 term, when Dundalk finished runner up to Shamrock Rovers in both Cup and League, Dessie became the ninth player to score four goals in a League match, equalling the club record (Jan 11th 1987 v Sligo Rovers, 8-1 away). His form drew the attention of Ireland’s Olympic squad manager Jim McLaughlin and he earned two caps in the Olympic Qualifying Tournament, against Sweden in May 1987 and Hungary in May 1988.

English clubs also took note—he guested with Arsenal during a two-week tour of Ireland, spent time with Liverpool and with Dundee United—but when he made his big move abroad it was to France, where he spent the 1989-90 season with Bourges in the French Third Division, helping them to second place and promotion.

He spent the 1990-91 year with Derry City under Jim McLaughlin and followed Jim to Shelbourne, after McLaughlin had been appointed general Manager with Pat Byrne in the dugout. In a front line that included Gary Haylock, Padruig Dully and Mark Rutherford there was no shortage of fire power and the Reds were crowned League Champs for the first time in 30 years, the crowning coming at Oriel Park, home of the defending champions. Within three months of the new season Dessie was on his way to Belfast.

After four highly successful Windsor Park seasons, in January 1997 for a fee of £4,500 he departed for the struggling Division 1 Newry Town, then under the management of his former Linfield boss, Trevor Anderson. Newry finished that season a full 30 points behind the Division champions—a year later they were celebrating a seven-point victory margin as Division 1 champions and Gorman’s 13 League goals had played a major part in delivering another League Championship.

A season later, Gorman’s 17 League goals, second in the Premier marksman’s list, drove Newry to a creditable fourth place league finish and qualification for the European Inter Toto Cup. A first round 2-1 aggregate victory over Croatian side Hrvatski Dragovoljac was followed by an equally impressive second round display against Bundesligaa side Duisburgg. Drawn away in the first leg, they came away with a respectable 2-0 defeat to the German professionals but an excellent 1-0 win at home wasn't enough to force extra time.

By the time that he left Newry in February 2000, seeing out the rest of the season with Bangor, he had 53 Newry goals to his credit and had crossed the century mark of Irish League goals in all competitions.

He was 35 year old when he lined out with Division 1 Ards, now under Trevor Anderson, for the 2000-01 season but even in the twilight of his career he demonstrated that he still had an eye for goal—as evidence his 23 goals, of which 18 came in the league—and his contribution over the title-winning season was to confound the critics.

Fittingly, a goal from Dessie in the third last league match against local foes Bangor, virtually sealed the Championship. This title, his last major victory, brought his Championship score to 6 titles with Dundalk, Shelbourne, Linfield (twice), Newry Town and Ards.

He stayed with Ards for just one term, moving on to Banbridge Town for a couple of seasons and, finally, he had a half dozen matches back in Dundalk at the beginning of the 2003 season, nearly 20 years and over 200 goals after he started out on his senior career.

He had a short spell with Loughgall in 2006-07 as assistant manager to Shane Reddish and in 2010 he took over the reins of Carnbane League side Bessbrook. Following their Gerald Kennedy Cup triumph a short time later, it seems the years have done little to diminish his Midas touch. And one thing is for certain: his players will be encouraged to play with the same flair, the same guile and the same cheeky grin which made Gorman one of the most entertaining players of his generation.

In March 2010 Ards supporters voted him on to their team of the decade and the accompanying citation read:

“Gorman was an instant hero, who played well regardless of who he partnered throughout that title winning season, sealing his place as a bone fide terrace hero when he scored at Clandeboye Park to propel Ards into the top flight. Ultimately it was a shame he didn't stay for our Premier League challenge, but his early exit meant his goal-scoring record and hero status was never diluted.”