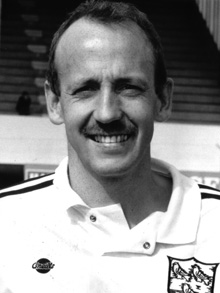 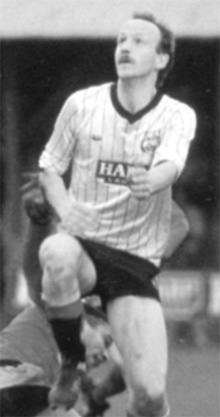 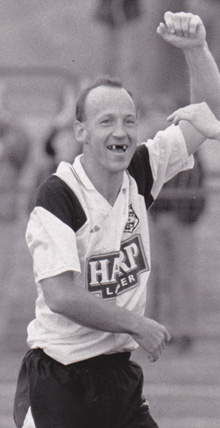 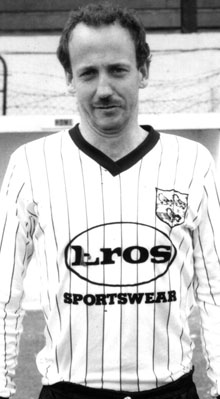 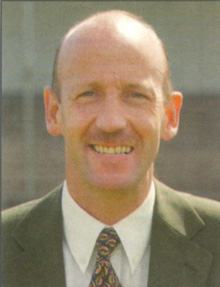 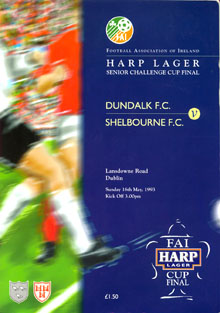 Joining Home Farm as a 17-year old, goalscoring winger Terry Eviston had three League of Ireland seasons before he transferred to Bohemians for the 1978-79 year, when Bohs chased Dundalk the whole way to the finishing line.

At the time, the prospects for Billy Young’s team, stuffed with up and coming stars, were very positive but the major honours would end up at Dundalk and Athlone and later Shamrock Rovers.

Over a five-season period until 1983-84 when he joined Jim McLaughlin at Shamrock Rovers, Terry was permanently in contention for the major competition honours but all he had to show was a 1979 League Cup medal when Bohs defeated Shamrock Rovers in the final and a 1983 FAI Cup Runner up when Sligo prevailed in the final.

In his first year at Milltown he landed a League Championship, Rovers first pennant in 20 years, but had to be content with another FAI runner up memento, after UCD shocked the Hoops in the final.

After a single Hoops season he joined Turlough O’Connor at Athlone Town, whose period of outstanding success was coming to a close and two years later he followed Turlough to Dundalk.

An early-season injury kept out for two months and when he returned he had to be satisfied with a place on the Oriel Park bench. But when called upon he scored some important goals, earning the title ‘super-sub’ and winning his place back at the end of the season as Dundalk finished in second place in the League and a berth in the FAI Cup final against League Champs Shamrock Rovers. Unfortunately for Terry, he collected his third FAI loser’s award after Rovers landed the League-Cup Double.

But everything came right in 1987-88—in an injury-free season when he played in 47of the club’s 50 games, his 13 League and Cup goals were vital to annexing the club’s second Double and to securing the ultimate player accolade when he was selected as the Soccer Writers Personality of the Year, and for good measure added the Dundalk Supporters’ Player of the Year Award.

Another reward was his membership of a Jim McLaughlin-managed League of Ireland squad that played a four-match tour of the USA, visiting New York, Fort Lauderdale and Los Angeles. When he had been with Bohemians , he had been with LOI squads that visited Spain (three match tour to Bilboa), Argentina (Buenos Aires 1980) and Brazil (Maceio 1981). He had also earned an amateur cap, against Greece in 1978.

Half of the Double squad had been replaced when Terry won his second Dundalk League medal in 1990-91 and only Alan O’Neill, Martin Lawlor and Gino Lawless remained when Terry collected another FAI runner up medal—his fourth—in the 1993 Lansdowne Road Cup-final loss to Shelbourne.

This was his last club appearance—when the 1993-94 season opened he was back with Shamrock Rovers, picking up where he had left off ten years previously by winning another League Championship, this time under Ray Treacy.

When he turned out for Rovers in the August 1995 UEFA Cup tie against Polish outfit Gornik Zabrze—a 7-0 loss in the away leg—he was making his 13th and final Euro appearance, having previously made six each with Bohemians and Dundalk.

When Treacy left in early 1996, Terry and Alan O’Neill took charge but the new season had hardly opened when they were both sacked. Terry moved for the rest of the1996-97 season as player-manager to the recently demoted Athlone Town, where he joined a rare band when he brought his career League goals aggregate to 100. A year later he retired after spending his 23rd League season with Cobh Ramblers.

His management year at Dundalk, 1999-00, finished in controversy when following inept League management, an equally inept arbitration procedure and a visit to the High Court, Kilkenny’s points penalty for playing an illegal player was cancelled, four months after the sanction had been announced. In consequence, Dundalk were deprived of a play-off spot and to rub salt into Dundalk’s and Terry’s wounds, Kilkenny defeated Waterford in the play-off, and were promoted to the Premier Division.

Terry’s last management stint in the League of Ireland arose in 2005 when he took on the role of assistant manager at Shamrock Rovers, leaving when manager Roddy Collins was sacked at season end. He later managed Drogheda Town in the Leinster League.