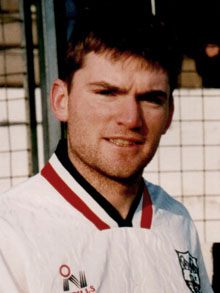 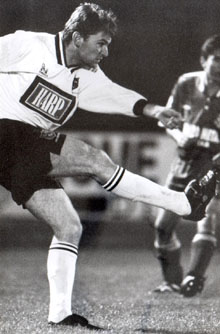 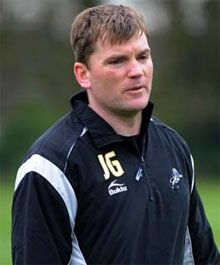 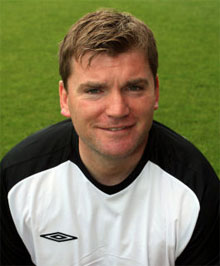 Signed by Dermot Keely in August 1995 to add some spark to Dundalk’s attack, injuries restricted his first Dundalk campaign but he still managed to head the League goalscorer’s list with 8 goals from 15(4) appearances.

He improved further still during his second term with 18 goals from all competitive games, that included a hat-trick in an FAI Cup game against Whitehall Rangers, the first Cup hat-trick in 30 years since Derek Stokes trio against another non-league club, Tramore Athletic, in February 1967.

He spent his next, and last, League of Ireland season with the relegated Drogheda United, who managed just two wins in the season—both against Dundalk!! Joe scored in the April 1998 Oriel Park 2-0 victory.

While with Watford, Joe had made half a dozen appearances with the Ireland Under-21 team.

His younger brother, 22-year-old Stephen (QPR, Doncaster) had a month’s trial with Dundalk early in the 1996-97 season, playing 3 games before being released. Before coming to Oriel he had spent time playing in China and Hong Kong and had played with Joe on Ireland U-21 sides.

Another brother, Kevin, played with England Under-18 (and was a UEFA Under-18 winner in 1993) and also earned three caps with England Under-21. He had a successful English League career spanning 18 seasons with over 500 appearances at Queens Park Rangers, Huddersfield Town, Barnsley, Plymouth Argyle, Milton Keynes, Luton Town and Barnet and was credited with more than 130 League games.

Injuries brought closure to Joe’s playing career shortly after his League of Ireland stint and he took up coaching, starting with the QPR Youths. He had subsequent spells as assistant manager at Exeter City and at Millwall.