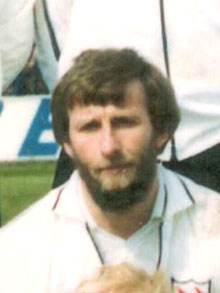 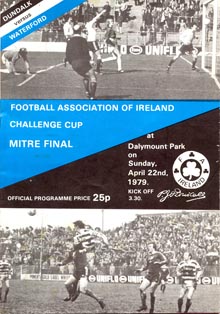 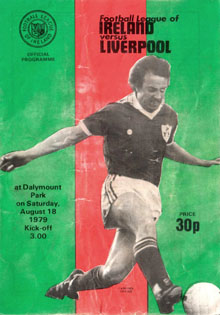 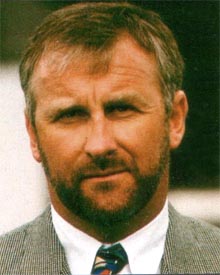 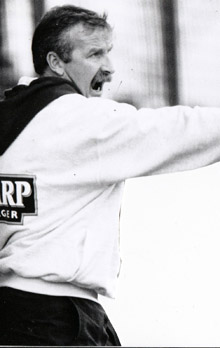 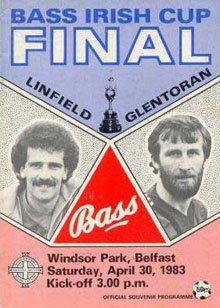 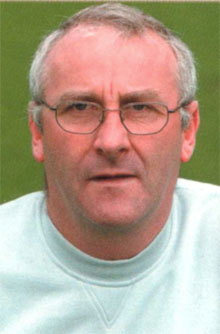 “He couldn’t kick, couldn’t head nor couldn’t pass” according to his manager Jim McLaughlin, but Dermot Keely spent his playing career collecting trophies and awards. Over seventeen playing seasons he was the lynch-pin of defences that delivered 6 League Championships, 5 FAI Cups (and the Irish Cup with Glentoran) and just about every trophy that was available.

In addition, in 2000 he was the recipient of the Soccer Writers Personality of the Year after managing Shelbourne to the League-Cup double.

Born into a football family, his father Peter had played wing-half with Shelbourne for 11 seasons, making about 300 appearances, winning two championship medals (1946-47 and 1952-53) and being second on another two occasions. He also had two League of Ireland caps but failed to collect an FAI Cup winner’s memento, being on the losing side in two finals (1949 and 1951).

Dermot, turned just 21 years of age and in the company of his brother Joe, added to the family collection in 1975, being with the Dave Bacuzzi-managed Home Farm when they supplied a series of shocks on the way to the FAI final, defeating Dundalk, Cork Celtic and St Patrick’s Athletic before getting the better of Shelbourne 1-0 in the final. This was Dermot’s second year with Home Farm and after the Cup final he moved to St Patrick’s Athletic.

A near ever-present during a three-season spell at Richmond Park, there were no honours. Pats were a mid-table league performer and the only joy in the various cup competitions was an FAI semi-final berth in 1976-77, losing out to Dundalk who went on to final day victory over Limerick. During the following summer a two-year deal to play in Australia fell through.

Twelve months later, Jim McLaughlin was re-building his squad and having already cherry-picked Leo Flanagan and Sean Byrne from the St Pats squad he added Keely. The result of the restructuring was a back-four made in heaven, consisting of Tom McConville, Keely, Paddy Dunning and Martin Lawlor, playing in front of Richie Blackmore.

The dividend was a League-Cup Double and a team that ranks with the best in League of Ireland history founded on a superb defence. For Dermot there two Player of the Month Awards, the Dundalk Supporters choice as Player of the Year and a batch of Inter League caps most notably on a Far East tour that took in games in Malaysia and Singapore as well as a trip to Argentina.

While failing in the following season by a point to catch Limerick for the League title, the Dundalk defence conceded a miserly 13 goals in the 30-game campaign that included 21 clean sheets. Highlight of this season was the 6-match European Cup odyssey, again grounded in the Keely-led defence that conceded just a single goal in the three home games.

A year later he rounded out his three year spell at Oriel Park when captaining the team to another FAI success, this time over Sligo, before joining Irish League Glentoran. His first Glens season, 1981-82, marked the club’s Centenary Year but they failed to successfully defend the League title, finishing runner-up to Linfield, and while the only success was in the Ulster Cup, the year’s highlights came in the European Cup.

After a first round victory over Luxembourg opposition, a fighting second round 2-0 away deficit against CSKA Sofia was marred by the sudden death of club legend, physio Bobby McGregor, after running on to the field to treat an injured player.

A second leg fight-back at the Oval saw the match go to extra time, but a deflection off the wall from a free kick finished the tie in favour of the visitors. The club history acknowledged the contribution of Keely as being “… significant and his experience and determination was bringing out the best in the other defenders.”

His second Glentoran season saw another League runner up spot to Linfield . But there were consolations—early season victories in the Ulster and Gold Cups and then closing the year with a replay victory in the Irish Cup, after a ten year gap, against the ‘old enemy’ Linfield and completing a Cup Treble.

He returned to Dublin for the 1983-84 year, player-managing UCD but within a couple of months he was enticed to join Shamrock Rovers by the recently appointed Jim McLaughlin, his former Dundalk boss and over the next three seasons there was an avalanche of trophies that included two League-Cup Doubles.

When McLaughlin left for Derry City after the 1985-86 Double, Keely was appointed player-manager of the Hoops and immediately delivered another Double but the sale of the club’s stadium changed everything and Keely stayed for just one more season.

After a one-season sabbatical he took over at First Division Sligo Rovers, last in the League in the 1988-89 term, and although losing the championship after a play-off with Waterford he managed promotion in his last playing season. His 14-season League of Ireland career included nearly 300 League games alone.

Over the following twenty years his managerial career did not lack for variety, headlines or trophies as he established himself as one of the most influential figures in the League of Ireland from this era. For Dundalk fans he earned undying fame when his no-nonsense approach worked wonders with an unfancied Dundalk squad, with the club in the shadows of financial meltdown, to the club’s 9th Championship success.

But his management career highlights undoubtedly came during his four successful seasons with Shelbourne, capped with another League-Cup Double—his fifth and the Reds first—and his selection as SWAI Personality of the Year in 2000.

A secondary school teacher, specialising in maths, his last club assignment was back at Shelbourne in 2007, after their demotion to the First Division due to financial irregularities.

His treasure chest has winners’ mementos both as player and manager for eighteen major trophies (10 League Championships, 7 FAI Cups and 1 Irish Cup), an unbeatable record in Irish football club history.

Mel Moffat, Irish Press, reporting from Haarlem on the 1979 second leg European Cup game against Linfield: “Keely, after passing a late fitness test, was a revelation and it was hard to imagine that 24 hours earlier he had limped out of a training session. If ever anyone doubted that Keely is the key man in this Dundalk team, there was clear and emphatic evidence of that fact yesterday.”